Commemorating the Birthday of

This year we will use  the 10 Call Signs Listed Below

Contact all 10 and you’ll spell out the Presidents name : EISENHOWER.

Certificates will be available to anyone who works ANY or ALL of the 10 STATIONS with ANY MODE. If you work all 10 Stations, your CERTIFICATE will be endorsed with ‘Clean Sweep’ certification.

The donation to receive the CERTIFICATE is only $5.00

This year we have registered our club, K5GCC, and our 1X1 call signs listed above with the Parks On The Air (POTA) program.  Some of our operators will activate  POTA sites using their personal call signs and one of our 1X1 call signs.  Watch for them operating from one of these sites dedicated to IKE… 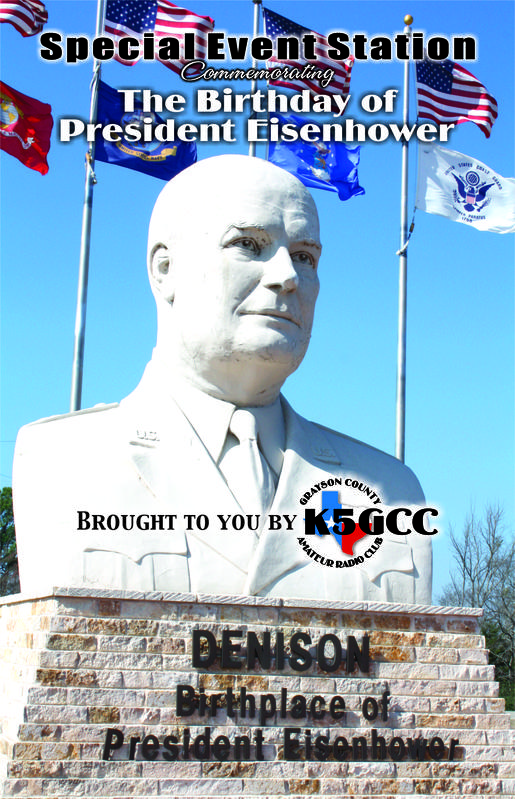 Dwight David “Ike” Eisenhower  (October 14, 1890 – March 28, 1969) was the 34th President of the United States from 1953 until 1961, and the last U.S. President to have been born in the 19th century.  He was a five-star general in the United States Army during World War II and served as Supreme Commander of the Allied Forces in Europe.  He was responsible for planning and supervising the invasion of North Africa in Operation Torch in 1942–43 and the successful invasion of France and Germany in 1944–45 from the Western Front.  In 1951, he became the first Supreme Commander of NATO.

Eisenhower was born on October 14, 1890, in Denison, Texas, the third of seven boys.  His mother originally named him David Dwight but reversed the two names after his birth to avoid the confusion of having two Davids in the family.  All of the boys were called “Ike”, such as “Big Ike” (Edgar) and “Little Ike” (Dwight); the nickname was intended as an abbreviation of their last name.   By World War II, only Dwight was still called “Ike”.

In 1892 , the family moved to Abilene, Kansas, which Eisenhower considered as his home town. As a child, he was involved in an accident that cost his younger brother an eye; he later referred to this as an experience teaching him the need to be protective of those under him.  Dwight developed a keen and enduring interest in exploring outdoors, hunting/fishing, cooking and card playing from an illiterate named Bob Davis who camped on the Smoky Hill River.

While Eisenhower’s mother was against war, it was her collection of history books that first sparked Eisenhower’s early and lasting interest in military history.  He persisted in reading the books in her collection and became a voracious reader in the subject.  Other favorite subjects early in his education were arithmetic and spelling.

Eisenhower was of Pennsylvania Dutch ancestry and was raised in a large family in Kansas by parents with a strong religious background. He graduated from West Point and later married and had two sons. After World War II, Eisenhower served as Army Chief of Staff under President Harry S. Truman and then accepted the post of President at Columbia University. 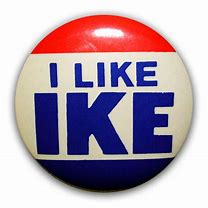 Eisenhower entered the 1952 presidential race as a Republican to counter the non-interventionism of Senator Robert A. Taft, campaigning against “communism, Korea and corruption”.  He won in a landslide, defeating Democratic candidate Adlai Stevenson and temporarily upending the New Deal Coalition.

Here is a video about Ike we think you’ll enjoy…

Just copy and paste the URL into your web browser.